As I’m learning more about fountain pens and inks, I’m starting to gather more info to understand what’s the difference between colorant types and ink properties.

In this article I will compare different ink compositions: dye-based, pigment-based, iron-gall inks.

Fountain pen ink is basically water with colorant and other chemicals required for proper functioning. Each manufacturer has their own formula.

Dye-based inks are by far the most common. They are low-maintenance. Dyes are water-soluble, so even if they do dry out, you can almost always clean it with just water. You should still clean your pens regularly, but failing to do so won’t harm your pen.

All ink companies produce dye inks, so I won’t mention them here.

Pigmented inks are inks that have tiny particles of pigment added to the ink to make it look darker. They are generally quick-drying and water-resistant.
They will clog the fountain pens if left sitting for a long time.

Drawing inks, India inks, or Calligraphy inks are designed for dip pens and should not be used in fountain pens, since they will clog then pen and its residue cannot be removed.

I’m a big fan of keeping lists of links, so here’s some links to official websites of brands producing pigmented inks (alphabetical order):

Iron gall inks are at least 1500 years old. They are still in use today because they are very water resistant.
They oxidize and blacken the paper gradually over time, sometimes corroding both the paper and occasionally the pen.
Modern iron gall inks are considered pretty safe, but they can damage the pen if left sitting for too long. The nibs made of stainless steel, and pens made from metal, where the metal touches the ink are most susceptible to be corroded; nibs made of gold, titanium, palladium, platinum, silver, are generally resistant to corrosion.

Shops to check in Europe:

Shading is a property of the ink that makes it looks darker in some areas and lighter in others. As you write, ink tends to pool at the beginning and end of letters, as well as where two lines intersect. The effect is a unique gradation of color intensity from letter to letter.

Extra fine nibs generally don’t put enough ink down to get shading, and flex nibs put too much. Average wetness is considered the best for shading. European medium nibs and Japanese broad nibs tend to be the sweet spot for best shading.

The paper also plays a big role. Smoother paper produces more shading since the ink has more time to pool into different areas when it dries.

Of the 3 properties I mention here, shading is the most common.

Sheen is an appearance that the dry ink shines with a different color, that seems metallic when viewed at an angle. Generally, the wetter your pen, the more sheen you get once the ink dries. Broad and flex nibs are the best in this case. 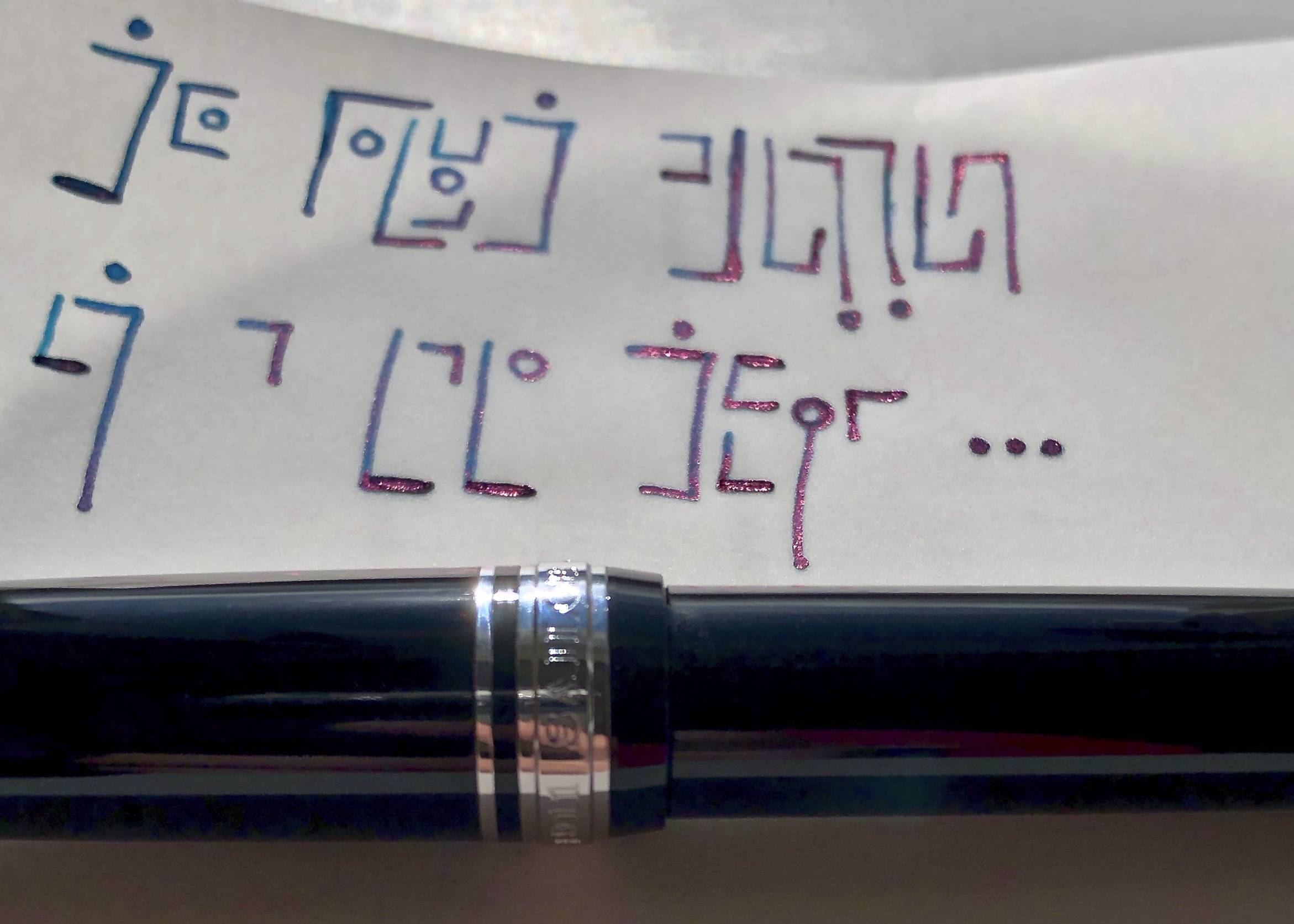 Sheen is very paper dependent, so again smooth, less-absorbent paper in combination with wetter pens will produce the most sheen.

On the downside, inks with high amounts of sheen are more prone to smearing, even after the ink is completely dry.

Shimmer inks have little shimmer (glitter) particles added to the ink. The tiny particles can be either gold, silver, copper, bronze, mica, etc.
The shimmer settles to the bottom of the pen or bottle, so when using shimmer inks you need to shake the bottle before filling a pen, and rotate the pen frequently when writing so the shimmer stays in suspension. 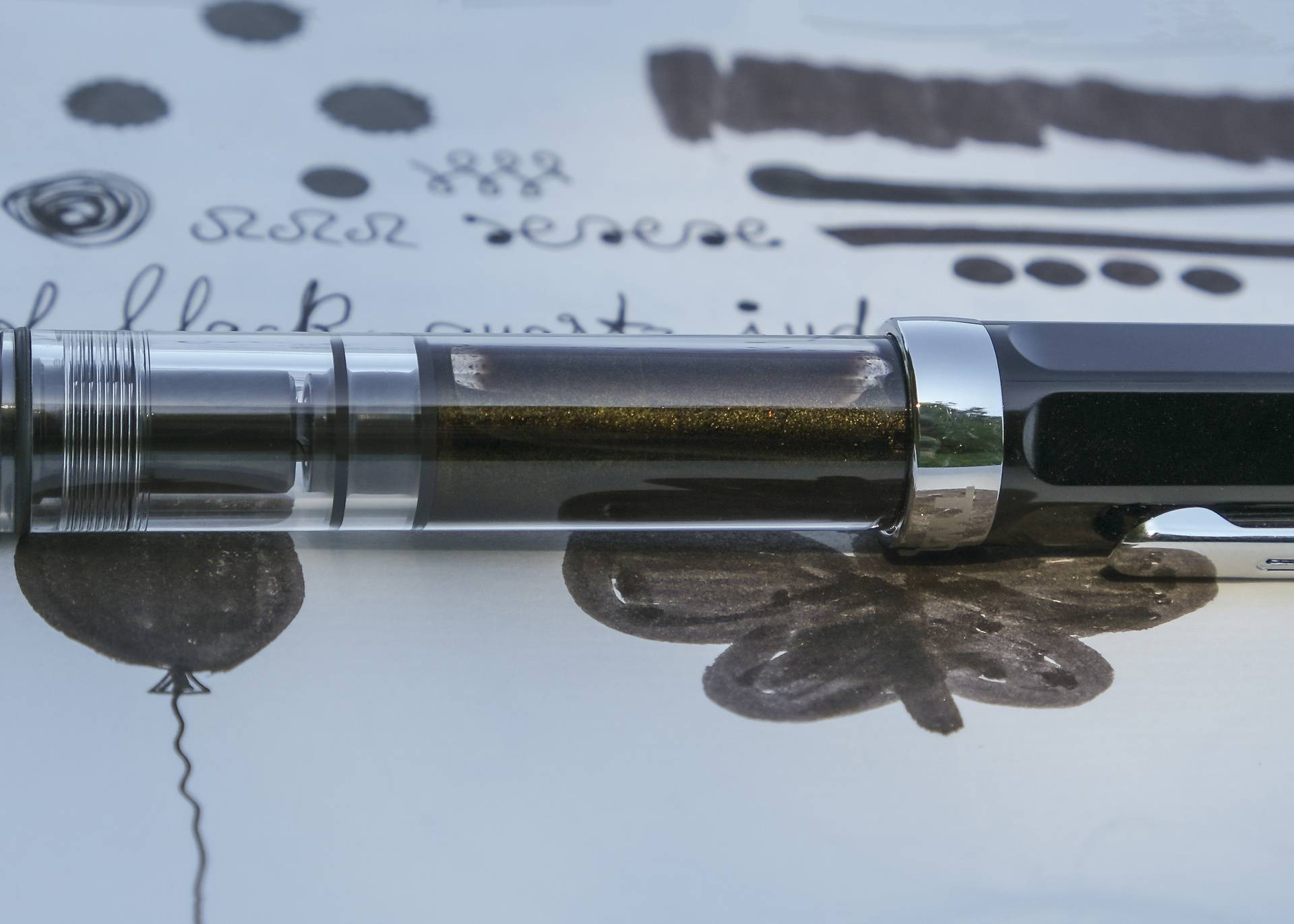 Again like in the case of sheening, broad, wet nibs will drop more ink and show off the glitter better.

Some shimmer inks will actually sheen and some inks with a strong sheen have a bit of added shimmer.
But shimmer is much more predictable than sheen and can be seen even with extra-fine nibs.

Shimmer inks are great for using in demonstrators (transparent) pens, because it’s easier to see when the shimmer has fallen out of suspension and they also look very cool!

Shimmer inks are a bit higher maintenance than most inks, because the glitter particles can clog the pen and can be hard to completely clean out.


I hope you found that useful 😊


⏳ 21 june 2020 :: This article seems to be very popular for some reason.
It was shared on HackerNews: https://news.ycombinator.com/item?id=23497259 on 13 june with 100+ comments and 150+ points and I got massive traffic on that day.
Also I noticed Algolia indexes HackerNews articles, so you can check other articles on the same theme:
https://hn.algolia.com/?q=fountain+pen